Library and facilities news. Get it here first!

Signup to get Library News sent directly to your email!

The Washington-Centerville Public Library Board of Trustees seeks proposals from marketing, public relations and/or communications professionals to assist in conducting an environmental scan to assess the opinions and needs of the community and to construct an informative communication plan using new technology, in addition to traditional methods. Learn more.

The phased reopening of Centerville Library has begun. The exterior book return is now open and Curbside Hold Pickup is available by appointment. Library staff are actively working on the next phase, to safely reopen the building, but no firm date has been set. The Woodbourne Library IS open Monday-Friday 10 AM – 6 PM and Saturday 10 AM – 5 PM. Learn more.

Woodbourne Library is now open for limited hours and services. The Library is open Monday-Friday, 10 AM – 6 PM, with 10-11 AM designated for seniors and at-risk populations, and Saturday 10 AM – 5 PM. Learn more.

In accordance with Governor DeWine’s extended stay-at-home order and in conjunction with other public entities, Washington-Centerville Public Library will remain closed until it is safe to reopen. Library staff are working to serve patrons virtually and will reinstate select services as soon as it is possible. Learn more.

Library Closes Until At Least April 5

In accordance with Governor DeWine’s extended stay-at-home order and in conjunction with other public entities, Washington-Centerville Public Library will remain closed until it is safe to reopen. Library staff are working to serve patrons virtually and will reinstate select services as soon as it is possible. Learn more.

Washington-Centerville Public Library leaders are actively monitoring the outbreak of novel coronavirus, also known as COVID-19. Our interest is to continue serving your library needs while maintaining the safety and health of our staff and public. Read more.

Library Journal recently recognized Washington-Centerville Public Library as a 5-Star Library, for the third consecutive year, in their Index of Public Library Service. "We have consistently performed well in this index and couldn’t achieve this level of success without the hard work of our library staff, a dedicated Library Board of Trustees and a supportive community that loves its library," expressed Library Director Liz Fultz. Read more.

One year after its grand re-opening, Woodbourne Library is being recognized by the American Institute of Architects for its design. Library officials and LWC Inc., the architects who designed the Woodbourne Library expansion and renovation, accepted the Honor Award, the highest accolade of its kind, for Newly Completed Buildings and/or Additions. Read more about the award, then view photos from the award ceremony, expansion and renovation.

Library Suspends Purchase of Macmillan Publishers’ eBooks Due to Embargo

Effective immediately, Washington-Centerville Public Library, in conjunction with Digital Downloads Collaboration (DDC) partners, is joining other large library systems across the country in the decision to no longer purchase newly released eBooks from Macmillan Publishers. Macmillan is one of five major publishers in the United States. This decision comes after months of discussion and advocacy to urge Macmillan to reconsider instituting a library eBook embargo. Read more!

The Washington-Centerville Public Library Board of Trustees announces the appointment of Elizabeth (Liz) Fultz as the Library’s new Director. Ms. Fultz brings more than 25 years of library and management experience to the job of leading Washington-Centerville Library, a 5 Star rated Library known for exceptional customer service, collections and services.


Ms. Fultz has been involved in nearly every facet of library planning and operations. She has participated in and/or led three strategic planning processes, developing the mission, vision, and values of the library, and was integral in the renovation, expansion, and reopening of Woodbourne Library. “I’m eager to take on the role of Director. I have a long history with Washington-Centerville Public Library, and with the Centerville/Washington Township community. As Assistant Director, I worked hard to build a strong foundation that enabled the Library to be one of the best in the nation. This is an exciting time for libraries, and I am thrilled for the opportunity to lead the Library’s continued success,” says Ms. Fultz.


Ms. Fultz was selected from a pool of nearly 30 applicants in a process that included opportunities for input from library staff, members of the community and the library Board of Trustees. “After a robust selection process, the Board of Trustees feels confident Ms. Fultz will lead our library with dedication, integrity, and professionalism,” said Ram Nunna, Library Board President. “Ms. Fultz was ultimately selected for her depth of institutional knowledge, breadth of experience, proven track record of excellent library administration, and her well established relationships within the community,” continues Mr. Nunna. Ms. Fultz will assume the duties of Director immediately.


Ms. Fultz is also a member of the Centerville Noon Optimists, and has served on their Board for two years. She holds a Masters of Library Science from the University of Kentucky and a Bachelors degree in Business from Morehead State University in eastern Kentucky. She and her husband Mark have two children and reside in Centerville/Washington Township.

After 10 years of service with Washington-Centerville Public Library and 35 years of service in the library profession, Kim Senft-Paras will retire on September 30. Kim is a true advocate for the library profession, has a passion for life-long learning and relishes the opportunity to link people with books and other library services in special ways.


Under her leadership, WCPL has significantly grown the number and variety of innovative collections, programs and services available to patrons, all while being a careful steward of taxpayer dollars. In just 10 years, she successfully led an informational campaign for passage of a 3 mil operating levy, established an award-winning Friends of the Library group that has raised more than $180,000 to support short-term library projects, and improved safe egress from Woodbourne Library with the addition of a rear driveway. Most recently, she led the $5.7 million, 9,000 square foot Woodbourne Library expansion and renovation. The project, completed on time and under budget, has received outstanding community response.


Kim’s contributions however, have not been limited to the Library. Since moving to Centerville in 2009, Kim has immersed herself in the community, adding value to numerous community groups. In 2011, Kim was named Centerville Rotarian of the Year for her tireless efforts in leading the club's community service efforts. Under her term as Centerville Rotary Club President, the Club received the prestigious Rotary Presidential Citation. Kim has also served on the Washington Township Recreation Center Advisory Board, providing input on the services the Center offers the community and collaborated with Centerville History to provide multiple opportunities to share the history of Centerville with Library patrons. In partnership with the Centerville-Washington Park District and a local architect, Kim initiated the installation of Little Free Libraries in several local parks.


In the coming months, the Library Board of Trustees will conduct the search for the next Director of Washington-Centerville Public Library.

Centerville Mayor, Brooks Compton, learns more about the library’s rich history and new facilities improvements, as well as a behind the scenes look at library operations. Watch video.

In 2013, Washington-Centerville Public Library set the wheels of a future Woodbourne Library Expansion Project in motion by purchasing the McDonald’s property, located at 6004 Far Hills Avenue. The Library now owns three adjacent properties along Far Hills Avenue (including the current Library Cataloging Center and Woodbourne Library). The purchase of the property along with the expansion and renovation are being funded with money set aside in the Library’s capital projects fund for improvement of the property.


Ultimately the three properties will become one unified "library campus" aimed at "unpacking" the collections, services and programs at Woodbourne Library, increasing parking capacity and improving traffic flow. Follow the progress of the project below by enjoying a slide show below featuring new and old photos of the Woodbourne Library property, reading the latest announcements and viewing the selected artwork. 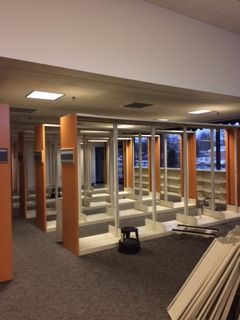 The expansion and renovation of the Woodbourne Library has prompted some related technological improvements at Washington-Centerville Public Library. The Library recently converted the entire Library collection from a barcode system to a RFID (Radio Frequency Identification) system, as well as installed new RFID compatible self-checkout machines and security gates. RFID offers the most up-to-date technology and several other benefits including: faster checkout/checkin, fewer misplaced items, and more ergonomically friendly with ability to scan multiple items at once. Read the news release for more.

The Montgomery County Auditor’s Office has named Washington-Centerville Public Library’s Deputy Fiscal Officer, Cindy Uttermohlen, the recipient of the first ever Jesse Haines Award. The award, named for the county’s longest-serving County Auditor, recognizes a local government fiscal administrator in Montgomery County who demonstrates a commitment to excellence and has served their organization and community with distinction and integrity. Read the news release for more.

The Friends of Washington-Centerville Public Library have won the 2016 Ohio Friends of the Library Recognition Award. This prestigious award recognizes innovative Friends groups across the state that support library programs, increase community awareness, and promote the mission and core values of the library. Read the OLC annoucement and news release for more details.

Teens who frequently visit the Washington-Centerville Public Library know teen librarian Charlie Hacker by his great reading recommendations and witty, laid back personality, but they may not know that when he’s not at the library, Charlie is defending their freedom. Charlie is a member of the 37th Infantry Brigade Combat unit of the Ohio Army National Guard and has been since 2011. He is deploying on a 14-month overseas mission to Kosovo starting in late summer. Read more!

According to the reports, Ohio’s investment in public libraries is both cost effective and of high value to Ohio residents.

Nearly 3 acres of land in Washington Township is now on the market for interested buyers. The land, owned by Washington-Centerville Public Library, is an undeveloped flat parcel at the southeast corner of St. Rt. 48 and Mandel Rd. Easy access to a main state route and adjacency to a residential area, make this land ideal for an assisted living community, daycare, church or light office use. The land is listed at $599,995. Interested parties should contact the Library directly at 937-610-4420.

Get Involved
Have Fun!
Services
About